Pick your favorite cover for the October release of THE UNDERTAKER! 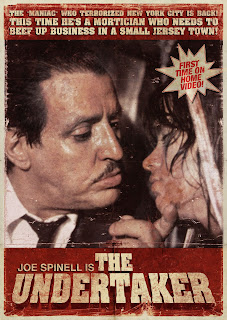 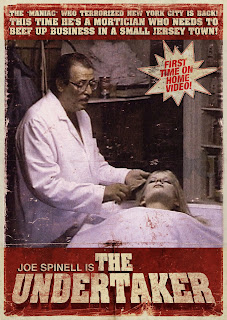 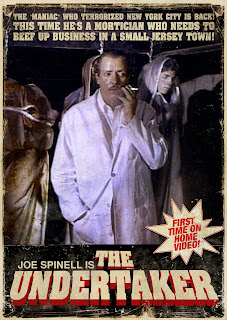 Here is your chance to pick your favorite cover for the October Release of the unreleased Joe Spinell film THE UNDERTAKER (aka DEATH MERCHANT). Here are the 3 covers, just post on this blog which one you prefer, A, B or C, and the one with the most votes will be it! Hurry, you have until Thursday 7/8 at 9 PM Pacific to vote, so vote now!
Posted by Code Red DVD at 1:05 AM 88 comments:

Romano Scavolini's NIGHTMARE soon to be out!

Our long awaited and most troubled title, NIGHTMARE, will finally be released on DVD in late 2010. This over budgeted project has been plagued with problems from the beginning: the damaged negative was unusable, four 35mm prints that had been claimed to be "pristine" were covered in white dots and emulsion scratches, and there were 3 botched telecine jobs on the transfer. Then there was the overpriced money pit extra of the Romano Scavolini interview that was supposed to have been shot in English, but was conducted in Italian. Anyway, it is not just translating the interview from Italian to English - that is fairly easy. The main issue is that every line of the translation needs to be timed to when Scavolini is talking so that it can be matched to when he's speaking. It's not as easy as using a dialog list for a feature film where you have various characters conversing and it's easy to put the subtitles where/when they belong. This Scavolini interview is basically a 95-minute one man talking feature-length film and requires much more than a translator just writing down what he's saying on a piece of paper. In case you are not aware, a 95-minute interview is much more dialog driven than an average feature film - and that is why the subtitling houses wanted more money for this project than subtitling an actual movie. The budget of this release is already way beyond the estimated sales and I simply do not have the money to put anything more into it. DVD sales have been extremely poor for the last 14 months and breaking even in this business is becoming a pipe dream.

To fix the best out of the 3 telecines we did, it is costing $42,000 to do it right (or more like passable). CODE RED does not recoup $42,000 in sales on any title. Overseas sales could be one way of recouping, but the film is already being bootleged in most countries even though it has a valid copyright. There is no way of stopping these thieves and no way of us getting some overseas funds to fix the film. Currently, a German DVD sleazeball label is bootlegging 4 of our titles, the same 4 we still haven’t recouped on. They saw profit before we even got to it.

Another problem was that many fans wanted the NIGHTMARE IN A DAMAGED BRAIN version, which is very strange as that is the UK title and it’s the cut version. It never played anywhere outside of the UK under that title. If any of you want that cut version, I can’t help you.

Goldmine Productions wants NIGHTMARE out and the fans want it out, so the most we can do is put out what we have done and move on. For the extras, we do have the participation of Baird Stafford and also main special effects man (Florida scenes) Cleve Hall. This is all we can deliver as far as extras at this time. There is a remote chance the Scavolini interview may be worked out in time for the release, but at this moment, that is not confirmed or finalized so as it stands now we have to say it won't be included. Also, this may be hard to believe to fans of NIGHTMARE, but most of the people who worked on the film do not like the film, were never fully paid, and have nothing but bad memories working on it. 90% of the people we asked turned us down for an interview. One even said he wished the film would go away and he was happy that the negative was destroyed. Of course, we know the fans absolutely LOVE the film and that's what really counts.

NIGHTMARE received twice the amount of email requests as our recently released SLITHIS, and that movie only sold 489 copies. NIGHTMARE has to sell 4,200 copies just to break even. That amount is practically impossible in today’s market for a niche title as this. Simply put, the funds coming in from my second business and freelance work are currently paying for CODE RED’s losses.

For the horror fans who didn’t support us in our past releases, it will be eBay time soon for stores/dealers because many of our titles will be Out Of Print by the beginning of next year. It’s fun to rent, but pretty soon if you want to own these discs, you better do so soon as several of our catalog titles are no longer going to be repressed. THE FOREST (special edition version), DOOM ASYLUM, FABULOUS JOURNEY TO THE CENTER OF THE EARTH and DEVIL TIMES FIVE (special edition version) are out of print. Many other title like THE UNSEEN, BOARDINGHOUSE, SOLE SURVIVOR, RUNNING HOT, and PETS will not be repressed and some of them have a very limited quantity left.

In any event, the long wait is finally over. NIGHTMARE is coming to DVD in 2010 in its best possible presentation. We hope you all enjoy the release and appreciate all your patience. Watch this spot for the official announcement of the streetdate. Thanks for the support!

UPDATE: Sorry - there were a couple of people who posted comments that were just now accidentally deleted. Please repost if you can as we want to make sure everybody's voice is heard. Sorry for the tech issue. Thanks for your support!
Posted by Code Red DVD at 1:41 PM 45 comments: 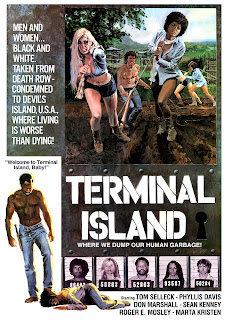 TOM SELLECK and his MAGNUM P.I co-star ROGER MOSLEY along with PHYLLIS DAVIS stars in this drive in classic! In the wake of a Supreme Court decision to outlaw the death penalty, California passes an initiative that designates TERMINAL ISLAND as a dumping spot for first-degree murder convicts, 40 men and 4 women, free to do what they like.......except leave! The main camp of convicts is controlled by the tyrannical Bobby (Sean Kenney, STAR TREK, CORPSE GRINDER), who along with Monk (Roger Mosley) rules with an iron hand, and the women are used as sex slaves. On the other side of the island, A.J. (Don Marshall, LAND OF THE GIANTS) and a group of more free-minded murderers have escaped and gone into hiding. When A.J. and his men liberate the women (including Phyllis Davis, drive-in star of SWEET SUGAR, and Marta Kristen, LOST IN SPACE) from Bobby's custody, tensions mount to an all-out confrontation for control of the island!

On camera interview with Sean Kenney

On camera interview with Don Marshall