CODE RED DVD is proud to announce the DVD re-release of the cult hit MADMAN! Once a holy grail for horror fans who didn't buy the Anchor Bay release back in 2001, MADMAN is back! We have the same extras (commentary/trailers) from that earlier release, but this time it's an anamorphic transfer, and there are some new on-camera interviews. The dvd will be a limited edition and once it's gone, it's gone. Don't miss the opportunity to buy the film before it's too late. More news to follow!
Posted by Code Red DVD at 3:26 PM 33 comments: 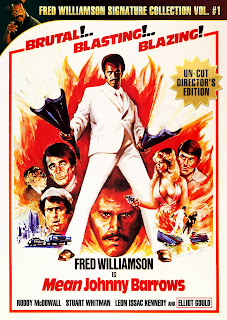 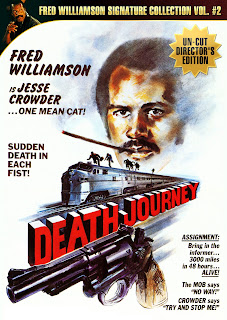 On 3/16, Fred “The Hammer” Williamson and CODE RED DVD present THE FRED WILLIAMSON SIGNATURE COLLECTION. These will be the first in a series of titles that were directed and star action hero Williamson in his famous roles, all in UNCUT DIRECTOR’S CUT versions! First is MEAN JOHNNY BARROWS (1976)! Ex-Vietnam vet Barrows (Williamson) has come home from a dishonorable discharge, is unable to find work and is living on the streets. A high school classmate (Stuart Whitman) offers him a job to wipe out rival mobsters in this action film filled with the hot Motown sound from Paul Riser. Co-starring Roddy McDowall, Luther Adler, R.G. Armstrong, Mike Henry, Anthony Caruso, Leon Isaac Kennedy, and Elliott Gould. 2nd release is DEATH JOURNEY! The first of the Jessie Crowder series pits Fred against a mafia who wants a mob accountant dead. Later remade by Hollywood as MIDNIGHT RUN, this action-packed thriller features the hot sensational top 10 hit “Do It Any Way You Want To." Both DVD releases feature 2.35:1 (16x9) new Hi-Def masters from the original camera negatives, a hot two-part interview with the Hammer himself, and scene to scene commentary with Fred! If this does well, more Fred films will follow in the future! MEAN JOHNNY BARROWS - MSRP 19.98, DEATH JOURNEY - MSRP 16.98.
Posted by Code Red DVD at 1:36 PM 7 comments: