Due to several requests and after Dark Sky's critically favored dvd release of THEY CALL HER CLEOPATRA WONG, Code Red is going to release another sought after Filipino action film, DEVIL'S THREE (aka PAY OR DIE).
When crime lord Lucifer Devilin's (Johnny Wilson) daughter is kidnapped by his employee, he asks his arch nemesis Cleopatra Wong (Marrie Lee) to find her and bring her back alive. Wong employs homosexual Tony Del Rios (played over the top by Franco Guerrero, ONE ARMED EXECUTIONER) and an obese fat lady, Rotunda, to find Devilin's daughter and help out on the mission. This politically incorrect comedy action film played on 42nd Street via Terry Levene's Aquarius Releasing as PAY OR DIE with a Kung-fu like poster!

Code Red has access to the original 35MM camera negatives, which were in miserable shape (seems like some idiot spilled alcohol on it, maybe to keep people away from the film), but we did the best we could in a painstaking restoration. Like Leo Fong once said, "Philippine filmmakers do not take care of negatives." Well, he was correct for reel 1 is in terrible shape. A reason for celebration, though, is that the film is the uncut full 99 minute version! (You can throw away the best selling 92 minute dvd-r version from Shocking Video.)

Director Bobby Suarez died in 2010, so PLLLLEEEEAAASE don't be a complainer and demand a commentary from him on the disc. Deceased people can't come back to life to be on dvd. So be nice or Cleopatra Wong will kick your butt! More news to come, so keep checking in. 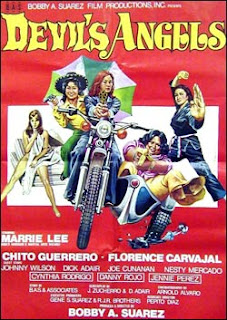