Here are some screenshots from our recent transfer of MESSIAH OF EVIL, supervised by Willard Huyck!

Here are some screenshots of our recent transfer, taken from a recently discovered 35mm vault element, which was supervised and color corrected by the director Willard Huyck, and the editor of the film, Oscar nominee Billy Weber. As you can see, the major difference between our transfer and all those bootleg full frame DVD's is that we preserved the original scope aspect ratio. Mr. Huyck also worked on the colors to make sure it is seen the way he intended it to be seen. The director also let us know that this is his preferred cut, as this print omits that song he never wanted in the final cut. Director Huyck and Gloria Katz will be recording an audio commentary track next month, and we are scheduling the DVD release hopefully for May or June. as a 35th Anniversary Edition. Stay tuned for more info.
Posted by Code Red DVD at 12:32 AM 81 comments: 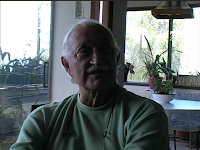 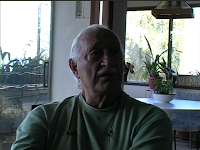 Veteran actor George Touliatos just gave Code Red a very insightful on camera interview about his career. He discussed his involvement on many Canadian films, including working with Michael Winner, Lee Majors, David Hemmings, Martyn Burke, Elke Sommers, Paul Lynch and others. We are honored he donated his time in granting us this interview which will be featured on a couple of our upcoming releases. Thanks George!
Posted by Code Red DVD at 11:45 PM 5 comments:

After four long years of searching, we were convinced we would never find it, but we have just located the original negatives of the blaxploitation, kung fu, gangploitation, subway monster hybrid DEVIL'S EXPRESS! The lab just inspected them and they have confirmed that indeed these are the original negatives, along with the trailer elements. We are getting ready to do a HiDef master and will be working on the extras soon. Hopefully we can have this out in September 2009!

Romano Scavolini gives us an on camera interview! 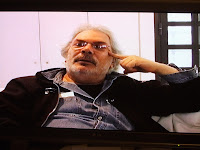 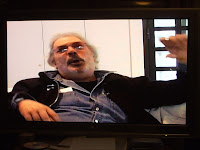 Well, we finally arranged it! Romano Scavolini has just finished what turned out to be a 90 minute on-camera interview with journalist Paolo Zelati. Only problem is, it's in Italian, so we are trying to subtitle it and then see what to keep and what not to keep. Once this is done, we finally will be ready to release the DVD of NIGHTMARE! But it all depends on when we get to subtitle it. If anybody who understands Italian who wants to volunteer, please let us know. Stay tuned.
Posted by Code Red DVD at 3:32 PM 35 comments: 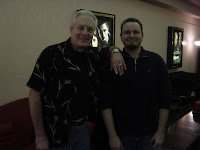 Lead guitarist for SORCERY, Smokey Huff, just gave Code Red a very insightful on camera interview about his career. He discussed his involvement in the film, as well as on the history of the band SORCERY. We are honored he donated his time in granting us this interview which will be featured as an extra exclusive to the U.S release of STUNT ROCK, scheduled for 3/31 street date. Thanks Smokey! And also a big thanks to Jeff Dolniak and David Hayes of BAN 1 PRODUCTIONS for shooting the interview for us!
Posted by Code Red DVD at 2:07 AM 5 comments:

For our non-horror customers, we are branching out a little bit to other genres and have recently acquired two classic 70's thrillers from the Allied Artists library: the tidy and clever THE INTERNECINE PROJECT starring James Coburn; and the sci-fi/espionage thriller WHO? with Elliott Gould and Trevor Howard, based on a well regarded novel by Algis Budreys. Both will be from HiDef masters. We are planning on some extras for these titles as well. Both are planned for a summer release.
Posted by Code Red DVD at 2:25 AM 10 comments:

Some screenshots from our recent transfer of BAKER COUNTY USA (TRAPPED)

We just finished the transfer on our recently acquired title TRAPPED (aka BAKER COUNTY USA) A 1982 Canadian backwoods thriller starring Henry Silva and Nicholas Campbell and directed by Canadian Cult director William Fruet. The transfer was taken from the original IP and we also hope to do some extras for this title. We are shooting for an early 2009 release.
Posted by Code Red DVD at 2:27 AM 20 comments:

For our upcoming U.S. release of STUNT ROCK we recorded a bonus audio commentary track a while back, this time with Richard Blackburn of LEMORA fame (he has an acting role in the film) and the producer Martin Fink (who also produced ONE FLEW OVER THE CUCKOO'S NEST). Both Blackburn and Fink joined director Brian Trenchard Smith in this really fun commentary session as well as a separate on-camera interview. The on camera interview of all three , the bonus commentary track, and the Q and A session Brian did at the Alamo Drafthouse will all be exclusive to the U.S. DVD release which will street on March 31st. We might add one or two more extras for the U.S. STUNT ROCK fans so stay tuned for any updates on the DVD!
Posted by Code Red DVD at 5:09 PM 5 comments:

Here are some screenshots for some of our upcoming titles in the new year. All have been recently transferred and are ready to go.

Here is RUNNING HOT (aka LUCKY 13) which we are scheduling for February 24th.

Here is a screenshot from STUNT ROCK, which we are scheduling for March 31th. We did the telecine from the recently discovered negatives, in aspect ratio of 2:35 in 16x9. The Aussie DVD will be using our transfer for their upcoming release, but our DVD will have more extras with Brian Trenchard-Smith involved in the DVD production of our release, so hopefully this make the U.S. STUNT ROCK fans happy and await until March 31st.

These shots are from PETS. Since the negatives no longer exist, this was the best print we were able to find. Despite having some big green lines and skips, we hope you approve of us using the only good 35mm element left on this title, and to avoid using an old full frame 3/4 inch tape from 1984. The print isn't perfect, but it looks good with great colors. We hope to have it out before June.

DERBY should be out in February 17, and TEENAGE HITCHHIKERS should be out on March 24th, with TRAPPED should be out in April as well as JIM MARKOVIC'S 42ND STREET TRAILER CLASSIC. We will be speaking with Cliff MacMillan to finalize the street dates in the next couple of days on some of the others! There will also be some more surprises and dates on some previously announced titles so stay tuned!
Posted by Code Red DVD at 9:42 PM 23 comments:

STUNT ROCK and NIGHTMARE at the Olympia Film Festival!

In this epic rock and roll saga, Grant Page, famous Aussie stuntman and stunt coordinator on countless favorites including Mad Max III: Beyond Thunderdome, teams up with musical group Sorcery to perform incredible stunts and magic! Impressively fantastical, Sorcery’s stage show includes grand battles between the King of the Wizards and the Prince of Darkness, as well as awe-inspiring stunts with large impaling objects and cars. Stunt Rock in the ultimate eye candy for thrill seekers and rock and roll adventurers!

Beer will be available for purchase with ID in the mezzanine.

A cautionary tale for those who don't believe that what you experience as a child shapes you as an adult. As a boy, George Tatum witnessed an event that his young brain couldn't handle. An event so shocking that traumatized little George grew up to be a psychopathic murderer! After being institutionalized for many years, he escapes his psychiatric prison with only one desire… to be reunited with his family. Unfortunately for an unlucky few (and his family), George is still a bit crazy with just a slight compulsion to kill! In the veritable sea of early 80s slasher movies, this cross between Maniac and Halloween stands out as one of the sleaziest, grimmest, and greatest entries of the lot. Climaxes in the greatest double axe slaying ever filmed!
Posted by Code Red DVD at 11:07 PM 4 comments:

On October 14th, Code Red, thru BCI, will release SWEET SIXTEEN on DVD. When Melissa Morgan (Aleisa Shirley), a gorgeous big city girl moves to a small Texas town, she creates quite a stir with her beauty and promiscuous attitude. She might be 15, going on 25, but all the boys at her new school are still anxious to get to know her. Shortly after her arrival, Melissa's dates start ending up dead. When the younger brother of a local hell raiser (Don Stroud) ends up dead, Melissa looks like the likely suspect. The town Sheriff (Bo Hopkins) must try to solve the killings before the killer strikes again. Along to help him is his Nancy Drew-ish daughter (Dana Kimmell, FRIDAY THE 13TH PART 3). What secret will be revealed when Melissa turns SWEET SIXTEEN?. Directed by Jim Sotos, the film features an all star cast that includes Patrick Macnee, Susan Strasberg, Larry Storch, Henry Wilcoxon, Sharon Farrell and Michael Pataki. It’s presented for the first time in a directors cut.

We delayed BUTCHER BAKER NIGHTMARE MAKER from our October schedule for a reason: we were finally able to arrange an on camera interview with Jimmy McNichol! Since he is busy and no longer lives in L.A., we weren’t able to have him participate on the DVD earlier this year. However, he contacted us and told us he will be in L.A later this year and would love to participate. We felt to have his on camera interview and maybe even an audio commentary was well worth delaying the release for. Fans of the film will surely enjoy seeing how the 70’s teen idol is today, as well as hear what he has to say about the film! We hope you understand the last minute delay, and hope you feel it was the right decision. The DVD is now scheduled for release in April.
Posted by Code Red DVD at 2:23 AM 10 comments:

BEYOND THE DOOR, limited edition o-card

BEYOND THE DOOR streets on September 16th and we thought we'd let you know its first pressing, which is only 2,500, will have a collector's edition limited o-card. All future pressings of BEYOND THE DOOR will not have this collectible o-card, so grab them before they're gone!
Posted by Code Red DVD at 9:56 PM 14 comments:

BEYOND THE DOOR street date 9/16 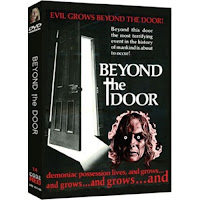 On September 16, Code Red DVD will release the first official U.S. DVD of the Euro horror classic BEYOND THE DOOR! The film, which grossed over $15 million back in 1974, stars Juliet Mills as a young woman who is suddenly pregnant with the Devil's child! The film also stars Richard Johnson (ZOMBIE, THE HAUNTING).

Kind of stuff we go through when we are in L.A area doing extras!

Code Red re-teams the cast and crew of HOT MOVES! 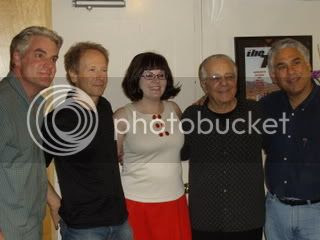 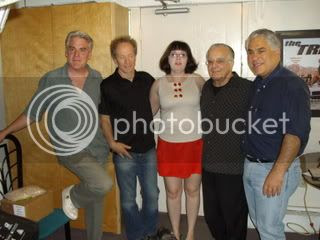 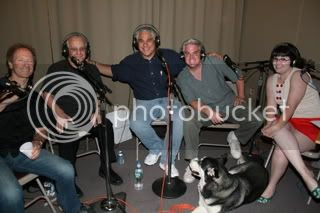 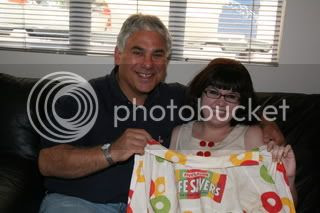 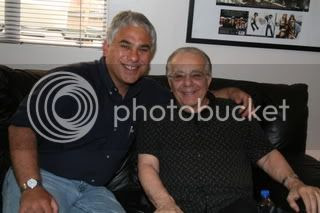 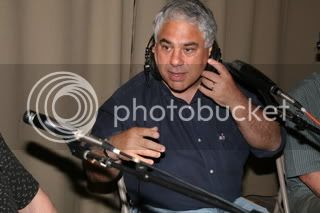 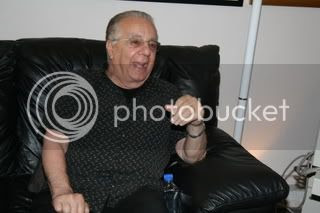 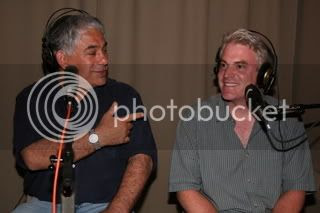 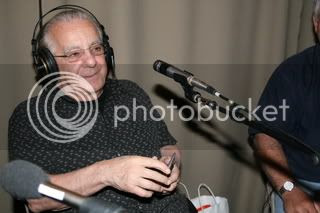 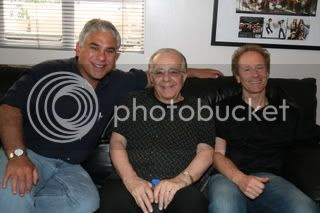 "Hot Moves" stars Micheal Zorek (Bubba from "PRIVATE SCHOOL") and Adam Silbar reunited with the writer Peter Foldy and director Jim Sotos for a wonderful audio commentary track moderated by our hostess Julia for Code Red's upcoming release of the 80's teen comedy classic "HOT MOVES". Zorek made a special trip to Los Angeles, to join us and give us plenty of stories regarding the film and to see his old friends, whom he hasn't seen in years, and it was one reunion everyone was very happy to be a part of
HOT MOVES will street date on October 21st! Also for October, we have Jim Soto's directors cut of SWEET SIXTEEN scheduled for 10/14, as well as Tim Kincaide's cult classic RIOT ON 42ND STREET for 10/28, which will feature an on camera interview with the comedic genius Zerok!!
Photos courtesy of Lee Christian
Posted by Code Red DVD at 11:11 PM 23 comments: