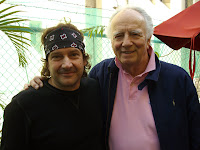 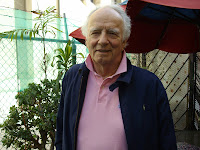 Actor-Director Peter Baldwin was kind enough to grant us an on camera interview for one of our upcoming titles that Peter starred in. Peter also granted us a lively audio commentary/interview with HOSTEL producer Scott Spiegel and our extras producer Lee Christian. The film is an Italian giallo also starring some lovely Euro actresses, a British comedian, and a tough guy Italian star playing against type as a bumbling constable. We have a brand new HiDef master in its original scope aspect ratio (2.35:1). We are trying our hands at some Italian films and this one is ready to go and will be hitting the streets in late July (tentative July 21th). Stay tune for more info.
Posted by Code Red DVD at 6:29 AM 2 comments:

For June, we have a Canadian backwoods horror with HENRY SILVA and aerial-action with BO SVENSON and LANCE HENRIKSEN

For June 21st, we have the Canadian backwoods thriller TRAPPED, directed by cult director William Fruet (DEATH WEEKEND, KILLER PARTY, SPASMS), written by John Beaird (MY BLOODY VALENTINE, HAPPY BIRTHDAY TO ME) and photographed by award-winning cinematographer Mark Irwin (SCANNERS, VIDEODROME, THE BLOB, THE FLY, SCREAM)! An innocent camping weekend turns into terror and murder for four young university students. Henry Chatwell (Henry Silva, OCEANS 11, SHARKEY'S MACHINE, CHAINED HEAT) tortures, stalks and kills his wife's lover, all witnessed by the students. Unable to contact the sheriff, the students return to their campsite where they are taken captive by Chatwell. Chatwell's verdict is that the students must die! Realizing he has gone too far, two villagers release the students, but they are soon recaptured one by one, except for Roger (Nicholas Campbell, THE DEAD ZONE, tv's DaVINCI'S INQUEST). Chatwell goes after Roger with an axe and the fight is on. When you are trapped like an animal...it's kill or be killed!

Specs on this disc are:

And also on the same day, we have the 1986 action film, CHOKE CANYON! To Dr. David Lowell (Stephen Collins, 7TH HEAVEN), Choke Canyon was the only location where he could conduct a vital experiment involving Halley's Comet and the production of safe, inexhaustible power. But to the Pilgrim Corporation's ruthless executive Brooke Alstair (Lance Henriksen, ALIENS, PUMPKINHEAD), it was an ideal spot to dispose of a deadly load of illegal nuclear waste. Lead by a veteran mercenary (Bo Svenson, INGLORIOUS BASTARDS, KILL BILL), the corporation's hired guns come after Lowell with everything they've got! Filled with careening off-road chases and exciting plane and helicopter dog fights, CHOKE CANYON is a high energy action thriller directed by Veteran action director Chuck Bail (THE GUMBALL RALLY).

BO SVENSON, STAR WHO IS ALWAYS WALKING TALL - an on camera interview with star BO SVENSON

TERROR CIRCUS (aka BARN OF THE NAKED DEAD) screening!

To celebrate the April release date of the official DVD of TERROR CIRCUS (aka BARN OF THE NAKED DEAD), Grand Illusion Cinema in Seattle will be playing this at 11PM on April 10 & 11, a well as 17 & 18

Three showgirls are on their way to Las Vegas to hit the big time. Soon after leaving a desolate gas station in the middle of the desert their car breaks down. Luckily (?) for them the three women are saved by a seemingly nice guy named Andre. He takes the three lovely ladies back to his house. There they soon learn that Andre isn't such a nice guy as they become new additions to his perverted circus of captive women! Tortured and abused they must escape Andre's grasp or die one by one. Oh yeah, and did we mention the horribly disfigured mutant that lives in the shed! A.K.A. Nightmare Circus & Caged Woman 2. Co-presented by Code Red DVD.

And be sure to pre-order the official DVD of this, released thru Media Blasters. Our TERROR CIRCUS (aka BARN OF THE NAKED DEAD) DVD release has been mastered in Hi-Def from the original camera negatives! This is the best this film will ever look, and it has been properly presented in its original aspect ratio of 1.78:1 and in 16x9. Special features include an on-camera interview with star Jennifer Ashley, make-up effects artists Doug White and Byrd Holland, costume designer Alan Apone, and producer Marvin Almeas; as well as an audio commentary with White and Holland. We hope this is what the true fans of this film have been waiting for and that it was worth the wait to see the film in this fully authorized presentation!
Posted by Code Red DVD at 12:53 AM 1 comment:

In Caged Men, aka I'm Going To Get You...Elliot Boy, our hero, the bank robber, is ratted out by his duplicitous, white-hot hippy girlfriend, and ends up in the clink. Almost completely lost (did this thing even come out?), and recently rediscovered by the folks at the Code Red DVD label, Caged Men is a fast-paced, garish grindhouse winner--with a twist (wink, wink!) 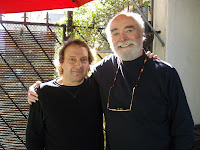 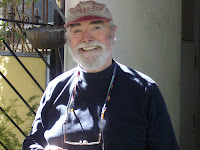 Veteran actor John Considine was kind enough to grant us not only an on camera interview, but an audio commentary for one of our upcoming titles! The lively commentary track was moderated by HOSTEL producer Scott Spiegel. We acquired the original elements from the vaults of MGM and did a brand new master in Hi Definition from the original camera negatives! It is a very macabre 70's horror film which now looks even more funky in HiDef. We should be scheduling this title for Halloween of this year, as all extras are completed, including an interview with the late directors son. Stay tuned!
Here are some shots of John in HiDef!