New Cover for NIGHT OF THE DEMON Several people said the original looked bad, so we got a better picture of Maria as well as the bigfoot. Enjoy!
Posted by Code Red DVD at 6:00 PM 42 comments: 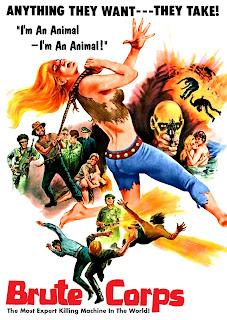 The most expert killing machine in the world!

A beautiful hitchhiker (Jennifer Billingsley, White Lightning) and a draft dodger (Joseph Kaufmann, Heavy Traffic) travel to Mexico and encounter a pack of mercenaries lead by a robust Colonel (Charles Macaulay, Raise The Titanic) who, along with his army, awaits to go to central America for their next mission. Psycho mercenary Wicks (Alex Rocco, Freebie and the Bean, Fire Sale) takes a liking to the girl which set the couple on the deadly game of torture and rape. One member of the mercenary, Ross (Paul Carr, Bat People) wants out as he helps the couple escape and battle the other mercenaries! Michael Pataki (Rocky 4, Dracula's Dog), Roy Jenson (Soylent Green), Felton Perry (Walking Tall, Robocop, Magnum Force) co-stars! Written by Michael Kars and Abe Polsky (writing team of Rebel Rousers) and directed by Jerry Jameson (Raise the Titanic, Bat People, Airport 77), and never before on home video, Code Red DVD is proud to present this grindhouse classic from a HD master!

On Camera Interview with Co-Stars Felton Perry and Parker West

Code Red Trailers
Posted by Code Red DVD at 12:41 AM No comments:

See you there Ninjas
Posted by Code Red DVD at 3:16 AM No comments: