ORIGINAL MOLD OF THE STRANGENESS MONSTER DISCOVERED AFTER 29 YEARS! 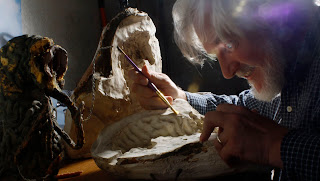 The DVD of THE STRANGENESS is now available everywhere for all to enjoy, but little did anyone expect the original monster would resurface after so many years! Deep in the bowels of a forgotten garage in Burbank only a couple of months ago, the original plaster mold of the creature was unearthed by the director. Restoration work on the creature has been done by the original sculptor and co-filmmaker Mark Sawicki. Sawicki has since recast the creature and painted it using the original decaying model as reference. Negotiations are underway with Offloadstudios.com to scan the resurrected creature and offer limited edition full color figures for the collector market. The sudden resurgence of interest in the Strangeness along with Sawicki's current books on effects and animation has led to Mark being asked to perform as an actor in independent features again. His most recent role was the villainous mad clone in Kevin Kutchaver's "Rescue Rocket X5" Also in development is the comedy "House O' Blood" from sheerforceofwill.com Interested parties can contact Mark's rep Vladek Savitskus through the filmingthefantastic.com web site.
Posted by Code Red DVD at 10:12 PM 18 comments: