CODE RED HAS A ZOMBIE NIGHTMARE‏ 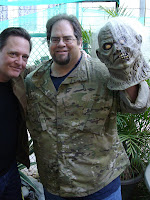 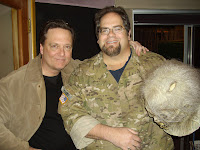 CODE RED recorded an audio commentary & filmed on-camera interviews with John Fasano and Frank Dietz for our upcoming release of ZOMBIE NIGHTMARE, the movie that started the Thor/Fasano craze that is sweeping horror fandom. Thor could not attend the commentary in person, but he joined us via telephone and his comments were recorded at his Canadian studio, making this a joint discussion track for Thor/Fasano/Dietz. The commentary, moderated by THE JITTERS writer Jeff McKay, will be fun and informative to all the horror fans out there who loved or hated the film. This Adam West/Tia Carrere horror film is also beloved by most Mystery Science Theatre fans as one of the craziest movies ever featured on the show! Code Red is planning a late 2009 release and are also planning to HiDef the film with the original camera negatives! Keep checking in for more details!! Same CODE RED time, same CODE RED label!!
Posted by Code Red DVD at 8:10 PM 14 comments:

NIGHT OF THE DRIBBLER makes its world debut via Code Red‏! 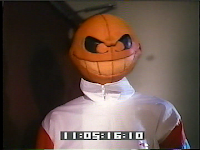 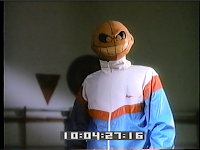 NIGHT OF THE DRIBBLER, a comedy slasher shot in 1995, but never released anywhere in the world, will make its world debut via CODE RED DVD this summer! Some psycho wearing a basketball mask is killing off the High School basketball team and it's up to the famous TV Funnyman Fred Travelena to find the killer! In the vein of Peter Sellers films, Fred plays 3 roles in the movie! Canadian TV's COLD SQUAD Gregory Calpakis also stars in this demented comedy horror film that has been lost for many years! Directed and produced by the fine folks who brought you SNUFF, THE CARPENTER, and the cult classic ZOMBIE NIGHTMARE! We hope you all will enjoy this lost classic!