We have been receiving many emails regarding CODE RED titles being released on Blu-Ray. We looked into sales of Blu-Ray and the product is simply not moving as well as most people think it is. It costs 3 times more money to release a blu-ray, and Sony needs to get paid also. With the Blu-ray market being at 18% and the code red titles in 2010 selling between 174 to 2,156 units, Blu-ray releases will never even come close to breaking even. We do have many HiDef masters and it's a shame not to release these film on a beautiful format. But an idea has come up, as we can release older CODE RED titles on a double-bill Blu-Ray with no extras for $26.98. This will not make the old dvd obsolete and it's basically just an upgrade disc for the movies themselves. Reason for the price is these dvd will most likely sell no more than 388 copies (18%). What do you all think? Please post comments.
Posted by Code Red DVD at 2:48 PM 113 comments:

WARNING: HOW TO SCORE WITH GIRLS + WHITE RAT

CODE RED has uncovered and will release two rare motion pictures shot in New York and that were thought to be completely lost. The first one is HOW TO SCORE WITH GIRLS, a wild comedy about some groovy GI's on a crazy night in the big city on a mission to get some hot chicks! Originally released as CRY YOUR PURPLE HEART OUT, the film was soon re-released by NMD Pictures under the HOW TO SCORE WITH GIRLS title. The filmmaker, Ogden Lowell, told us that only eight 35mm prints of the film were ever struck and that the negative is no longer at Technicolor and is basically lost. CODE RED searched high and low and was unable to find any of the eight 35mm prints anywhere. Ogden did still happen to have a 3/4 inch tape master made in 1980, so thankfully the film is not completely lost. Although the best materials for this film are no longer available, we feel this very rare film still deserves to be seen, even in its only surviving elements. The second film is the 1972 feature WHITE RAT, made by the team of director Steven Mullin and writer Nick Paindiris. Paindiris once had his own private 35mm print, but that print was lost after a prank caused by the lab at the time, and it has disappeared ever since. Mullin did still have a vhs tape of the film (with some worn spots), and since that is the only copy of this lost film still available, that will have to be our master and we hope fans can still enjoy seeing this very rare film even in this form. Since both films are from old tape masters, we talked to the rights owners and they have agreed for us to double bill them accordingly and we do feel the need to inform the consumer upfront about this. These films are not remastered in any way and come from tape masters, as the proper elements no longer exist, so we at CODE RED DVD politely suggest that you do not buy the dvd if you are expecting high quality remastered transfers. This is the only way these two lost films will be out in any condition, unfortunately, and there's simply no way for any of us to turn back time and retrieve these films' negatives which disappeared a long time ago. We do think both films are wildly entertaining exploitation films of a bygone era, and we truly hope that discerning fans can still enjoy them regardless of the less-than-stellar surviving master materials used. Thanks for understanding.
Posted by Code Red DVD at 2:39 PM 10 comments:

We recently had a problem with the GOD'S BLOODY ACRE dvd and the disc was recalled and not shipped to most internet stores. Since this product was created many months ago, the disc data was no longer on our hard drive and we'd have to re-do the whole thing from scratch. Since the pre-order was so small & non-existant, we instead decided to release the film with another Wayne Crawford/Andrew Lane film, TOMCATS, in the hopes it would sell more units. The negative and 35mm print were lost on TOMCATS, but Wayne had the "longer version" on a 3/4 inch tape master before the distributor edited the film to get an "R" rating. But for some strange reason on the message boards, the buying public is screaming to find the recalled GOD'S BLOODY ACRE disc to the point of overpaying on ebay for the handful of discs that leaked out and should've been sent back or destroyed. We were amazed that people who don't usually buy CODE RED titles now want this title more than ever. We do listen to the demands and complaints and we would hate to see these scalpers and opportunists rip-off our consumers $275 to buy this film on dvd. So we will release the title again by itself and quickly reconstruct everything, including the controversial "uncensored" Crawford interview and get it on the market asap. You guys want it now & can't wait, so we listened to your cries! It'll be out again within a month to give all the fans what they want, and to stop the scalpers on ebay from selling this title for 40 times the wholesale cost.
Posted by Code Red DVD at 4:13 PM 33 comments: 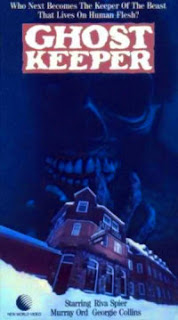 Due to overwhelming demand from horror fans, Code Red has acquired the 1981 Canadian slasher film Ghostkeeper.

A trio of friends on a snowmobile trip in the Canadian Rockies become lost after venturing up a trail during a bad snowstorm. They stumble upon a seemingly abandoned hotel lodge and decide to spend the night, unaware of the grave danger that they have put themselves in.

Internet columnist Amanda By Night says, “this Canadian horror film is slasher and monster lite, but has oodles of snow and deep synthesizer sounds to keep you going. Like ‘Madman’, or more appropriately, ‘The Prey’.”

Director Jim Makichuk is on hand to create extras for this lost slasher.