CLASS OF 74 / GABRIELLA GABRIELLA BOTH VERSION COMING TO DVD! 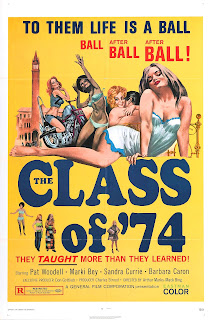 Mack Bing's 1972 GABRIELLA was a confusing poorly put together sex movie which really didn't make much sense.  2 years later, General Films and Arthur Marks bought the film and took 1/3 of that film and shot new footage with Pat Woodell, Marki Bey, Sondra Currie and got Barbara Mills back as her title character Gabriella to make a film that make sense.  According to imdb the film grossed $4,000,000 (USA) in 1974!  CODE RED and Films Around The World is proud to present CLASS OF 74 from the original negatives (only reel 1/10min had to be from a damaged print as Reel 1A was missing). and original GABRIELLA (from a preserved 35mm release print) as a double bill release.  So it's drive-in fun as you can watch both film!  One movie, two different version!
coming soon on code red.
Posted by Code Red DVD at 11:23 PM

Glad to see this! Was wondering the fate of this particular film, especially since Dark Sky Films acquired most of Arthur Marks' General Films releases, although there was no mention of this one. Dark Sky did a good job with their releases, however they stopped before getting around to FINALLY releasing THE ROOMMATES, which is my Most Desired DVD release. Hopefully they'll get it in gear and FINALLY give us what we've patiently waited for!

I actually have a DVD of the Roommates. a friend of mine acquired it from someone who was involved in the release that never happened. I was glad to finally see it.

who do I have to kill for Marks' THE ROOMMATES (1973) to finally be released?

who do I have to kill or bribe to get THE ROOMMATES on DVD? I've been waiting forever to see this gem again.